Sepedi Translation Services Sesotho sa Leboa / Sepedi speakers were estimated at over 4 and a half million South Africans in the 2011 national census. Sesotho sa Leboa (also called Sepedi or Northern Sotho) is South Africa's 5th biggest language at over 9% of the population. It will reach more South Africans than English in the Limpopo (53%) and Mpumalanga (9%) provinces. The table below shows Sepedi with the other 11 South African languages by on a provincial level. For many major towns and cities in the Limpopo it is the dominant language.  Sepedi is South Africa's sixth most spoken language at 9% of the population. Polokwane is notable with 78.8% first language speakers. More data on Polokwane can be found on StatsSA at: Polokwane Municipality
Read more

Xhosa Translation Services IsiXhosa is South Africa's second most-spoken language at 16% of the population as of the 2011 national census. Xhosa will reach more South Africans than English in the Western Cape (25%), Eastern Cape (79%) and Free State (8%) provinces.  IsiXhosa speakers were estimated at over 8 million South Africans in the 2011 national census. The table below shows isiXhosa in the context of the other 11 South African languages by province. For major cities in the Eastern Cape such as East London or Gqeberha (formerly Port Elizabeth) and all smaller cities and towns in the region it is the dominant language. It is also one of the three major languages of the Western Cape where the language has much more reach than isiZulu, Sepedi, Setswana or Sesotho. Xhosa is South Africa's second most-spoken language StatsSA's interactive map by municipality for the Eastern Cape can be found at  http://www.statssa.gov.za/?page_id=964   You can visit our site for more detai
Read more

Zulu Translation Services Zulu is the most spoken first language in South Africa at almost a quarter of the population, 23% as of the 2011 national census. The strength of translating your content for an isiZulu speaking audience will be felt in the east of the country. IsiZulu will reach more South Africans than English in Gauteng (20%), KwaZulu-Natal (78%) and Mpumalanga (24%) provinces. Find out more about  Zulu translation services  on our website. IsiZulu speaking South Africans were estimated at over 11.5 million in the 2011 national census. To visualise the impact of Zulu translations for a KwaZulu-Natal or Gauteng readership, see the table below. It should give a good visual guide to see the language in context i.e. compared with isiXhosa, Afrikaans and Sepedi. Zulu is South Africa's most-spoken language Notably Zulu is also the second most-spoken language in Mpumalanga, after Siswati. A detailed breakdown by municipality can be found on Statistics South Africa. Almost fo
Read more

Resizing a Word document to get through email restrictions 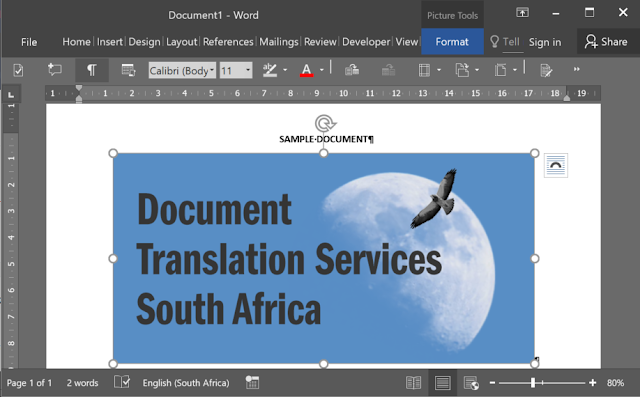 A lot of South African departments have email size restrictions. This is the quickest and best trick I know to reduce your file size so you can email a file. Be aware that it will reduce the image quality of the images in your file. If you want the high res images to retain their resolution you will either need to paste them in when the document is back with you, or resize individual images.  In the translation field we often have to work around this.  It's just 4 steps: 1. Click on any image in your document. You'll see  Picture Tools  pop up above  Format . Click on  Format  or  Picture Tools . 2. On the left of the ribbon you will now see the  Compress Picture  button. Click it. Zoomed:  3. Now you can compress all your pictures and radically reduce your file size so you can email it.  Make sure to use these settings . Uncheck   Apply only to this picture.  It'd checked by default. Change  the Target Output to  96ppi . The bigger ones are what is making the file big. C l
Read more

Kiswahili is the national language of the Democratic Republic of the Congo (French, Kikongo, Lingala, and Tshiluba) Kenya (English), Tanzania (English) , and Uganda (English) . South Africa and Botswana now offer the language as an optional third language in the school curriculum. Estimates on the total number of first-language speakers vary between 120 and 150 million making Kiswahili the most spoken language in Africa. Organisations translating material for an East African audience will translate their texts into Standard Kiswahili . Standard Kiswahili is similar but not identical to the Kiunguja dialect spoken in Tanzania. There are a total of 15 recognised regional dialects of which Kimvita in Kenya and Kiamu spoken in Lamu are worth bearing in mind. If you are producing audio or local content for Dar es Salaam, Mombasa or Dodoma, you should always use one of the regional dialects when choosing your voice artist. If you are translating a document, it is always advised to transla
Read more

Translation Services Cape Town The three most spoken languages in Cape Town are Afrikaans (35%), isiXhosa (29%), and English (28%). The 2011 national census estimated the city's urban population at 3.7 million people. English speakers are only 9.8% of the South African population. When translating into Afrikaans and isiXhosa you will be reaching an additional 30% of people in their home language. This is approximately three times more South Africans. You can find more information on translation services for Cape Town on our site.  Here you can see the three major languages of Cape Town and how they relate to the South African linguistic landscape. You can also visit our site in any of the 11 official languages:  isiZulu ,  isiXhosa ,  Afrikaans ,  Sesotho sa Leboa (Sepedi) ,  Setswana ,  Sesotho ,  Xitsonga ,  Siswati ,  Tshivenḓa  and  isiNdebele .
Read more

Translation Services for Pretoria and the City of Tshwane  English is spoken as a first language by a sixth of the people living in Pretoria. The three most spoken languages are Northern Sotho / Sepedi 19%, Afrikaans 18% and Setswana 15%. Other languages of note are Xitsonga and isiZulu at 8% respectively. IsiNdebele and Sesotho speakers also account for 5% each. In 2011, the national census estimated the city's urban population at just under 3 million people. English speakers account for only 9.8% of the South African population. When translating into Afrikaans, Northern Sotho, and Setswana you will be reaching an additional 31% of people in their home language. This is approximately three times more South Africans countrywide. You can find more information for  translation services Pretoria on our site.  You can also visit our site in any of the 11 official languages:  isiZulu ,  isiXhosa ,  Afrikaans ,  Sesotho sa Leboa (Sepedi) ,  Setswana ,  Sesotho ,  Xitsonga ,  Siswati ,
Read more

Translation Services Johannesburg The four most spoken languages in Johannesburg are isiZulu (23%), English (20%), Sesotho (10%), and Setswana (8%). The 2011 national census estimated the city's population at 4.4 million people. English speakers only make up 9.8% of South Africa's population. When translating into isiZulu, Sesotho and Setswana you will be reaching an additional 39% of people in their home language. This is approximately four times more South Africans countrywide. You can find more information on our  translation services Johannesburg  webpage.  You can visit our site in any of the 11 official languages:  isiZulu ,  isiXhosa ,  Afrikaans ,  Sesotho sa Leboa (Sepedi) ,  Setswana ,  Sesotho ,  Xitsonga ,  Siswati ,  Tshivenḓa  and  isiNdebele . Or visit  iiTranslation - Translation services South Africa  services in English.
Read more 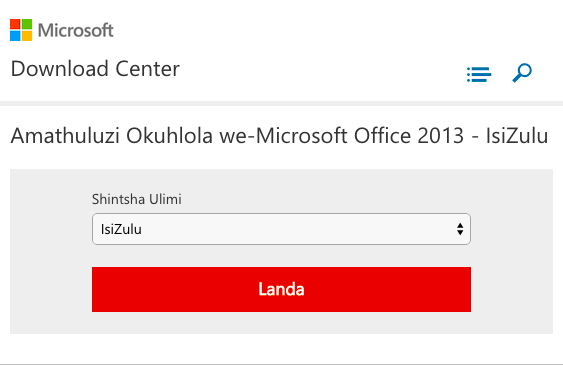 Use Microsoft Word 2013’s Spelling Checker to check your Zulu, Xhosa, Northern Sotho, Tswana or Afrikaans documents. 1. Download and install Proofing Tools for your language. http://www.microsoft.com/zu-ZA/download/details.aspx?id=35400 2. Go to: FILE - Options - Language and check it’s been enabled. Create a Custom Dictionary: 3. Now create a Custom Dictionary by going to: FILE - Options - Proofing - Custom Dictionaries. 4. Now click New and name your dictionary i.e. ZUL.dic. 5. Your dictionary will now appear under All Languages. 6. Change the dictionary language to your language i.e. isiZulu. 7. Click OK Check Your Spelling: 8. Select all or the parts of your document in that are in Zulu, Xhosa, Northern Sotho, Tswana or Afrikaans and click the language in the lower left of MS Word. 9. Language options will appear. Make sure that "Do not check spelling or grammar" box is not ticked. 10. Scroll to your language i.e. isiZulu and double-click it. 11. Your
Read more 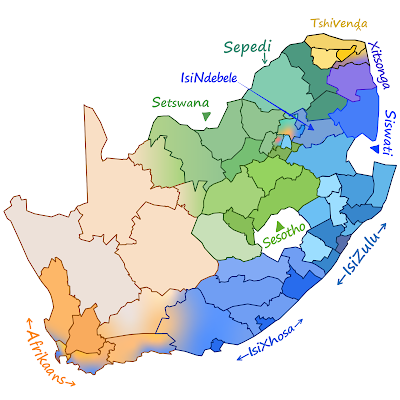 Translation Services for the 11 South African Languages Document translation for the 11 official South African languages varies from province to province in South Africa. Depending on where your readership or audience are, English documents could have little to no impact on the people you want to reach. The 11 official languages: isiZulu , isiXhosa , Afrikaans , Sesotho sa Leboa (Sepedi) , Setswana , Sesotho , Xitsonga , Siswati , Tshivenḓa and isiNdebele  can have a lot more power than English in the right province or city. Languages spoken in South Africa's provinces Head to our website for more details:  iiTranslation - Translation Services South Africa
Read more

How to say Hello to every South African 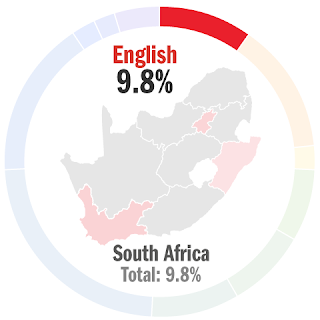 Say "Hello" in all 11 official South African languages English will reach less than 10% of South Africans in their home language. The first thing every South African should learn at school is how to say "hello" to every other South African they'll meet. It's not so hard. You'll need to learn eight new words. IsiZulu and Siswati share "Sawubona"; Sesotho, Sepedi and Setswana can share "Dumela"; and you already know how to say hello in English.  IsiZulu Sawubona IsiXhosa Molo Afrikaans Hallo
Read more